In March 2003 Richard Long travelled to the Maasai Mara for a short photographic holiday. It was during this trip that he visited the school and learned about its needs, since then he has returned at least twice a year to assist the schools and local community.

The directors and trustees are:

Our community officer in the Mara is: 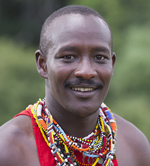 Harrison has the important role of being the charity’s eyes and ears in the Mara.  Although he is a full time employee of Governors’ Camp they have generously appointed him to be our local community officer and he regularly meets with the schools, students and community and reports back to the Trustees. It would be very difficult for us to operate without his hard work and dedication.

A Trustee visits the local community twice a year and establishes what the needs and problems, if any, are. The Trustees meet on a regular basis and decide on the work, funding and spending of the charity.

All funds raised are used to support the schools and local community. Please note that no funds are used to meet any overheads or salaries in running the charity. The directors and trustees work without any remuneration or salary.